SLURM is only one narrow (but widely-used) use case in a broad ecosystem of multi-node scientific application clusters: let's not over-specialise to that. It raises the question of what is needed to make a generally useful, flexible system for creating Cluster-as-a-Service?

What do Users Really Want?

A user of the system will not care how elegantly the infrastructure is orchestrated:

Scientists certainly do not want to be given clusters which in truth are just replicated infrastructure. We must provide immediately useful environments that don’t require scientists to be sysadmins. The time to science (or more bluntly, the time to paper) is pretty much the foremost consideration. Being able to use automation to reliably reproduce research findings comes a close second.

Bringing it all together: OpenHPC-as-a-Service

The OpenHPC project is an initiative to build a community package distribution and ecosystem around a common software framework for HPC.

OpenHPC clusters are built around the popular SLURM workload manager.

A team from Intel including Sunil Mahawar, Yih Leong Sun and Jeff Adams have already presented their work at the latest OpenStack summit in Boston:

Independently, we have been working on our own OpenHPC clusters as one of our scientific cluster applications on the SKA performance prototype system, and I'm going to share some of the components we have used to make this project happen. 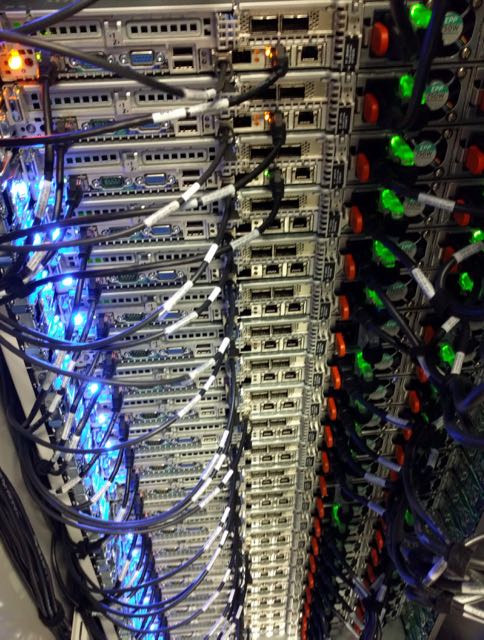 The invocation of the infrastructure role becomes equally simple:

Adding Value in a Cloud Context

In the first instance, cloud admins recreate application environments, defined by software and deployed on demand. These environments meet user requirements. The convenience of their creation is probably offset by a slight overhead in performance. On balance, an indifferent user might not see compelling benefit to working this way. Our OpenHPC-as-a-Service example described here largely falls into this category.

Software-defined cloud methodologies enable us to do some more imaginative things in order to make our clusters the best they possibly can be. We can introduce infrastructure services for consuming and processing syslog streams, simplifying the administrative workload of cluster operation. We can automate monitoring services for ensuring smooth cluster operation, and application performance telemetry as standard to assist users with optimsation. We can help admins secure the cluster.

All of these things are attainable, because we have moved from managing a deployment to developing the automation of that deployment.

Reducing the Time to Science

Our users have scientific work to do, and our OpenStack projects exist to support that.

We believe that OpenStack infrastructure can go beyond simply recreating conventional scientific application clusters to generate Cluster-as-a-Service deployments that integrate cloud technologies to be even better.