Likely doubts over the adoption of OpenStack centre around the impact of infrastructure virtualisation. From the skeptical perspective of an HPC architect, why OpenStack?

In this section, we will describe the different forms of overhead that can be introduced by virtualisation, and provide technical details of solutions that mitigate, eliminate or bypass the overheads of software-defined infrastructure.

The Overhead of Virtualisation

Analysis typically shows that the overhead of virtualisation for applications that are CPU or memory intensive is minimal.

Similarly, applications that depend on high-bandwidth I/O or network communication for bulk data transfers can achieve levels of performance that are close to equivalent bare metal configurations.

Where a significant performance impact is observed, it can often be ascribed to overcommitment of hardware resources or “noisy neighbours” - issues that could equally apply in non-virtualised configurations.

However, there remains a substantial class of applications whose performance is significantly impacted by virtualisation. Some of the causes of that performance overhead are described here.

Factors such as storage IOPs and network message latency are often critical for HPC application performance.

The additional overhead is mitigated through paravirtualisation, in which the guest OS includes support for running within a virtualised environment. The guest OS cooperates with the host OS to improve the overhead of hardware device management. Direct hardware device manipulation is performed in the host OS, keeping the micro-management of hardware closer to the physical device. The hypervisor then presents a more efficient software interface to a simpler driver in the guest OS. Performance improves through streamlining interactions between guest OS and the virtual hardware devices presented to it.

Hardware Offload in a Virtualised Network

All modern Ethernet NICs provide hardware offload of IP, TCP and other protocols. To varying degrees, these free up CPU cycles from the transformations necessary between data in user buffers and packets on the wire (and vice versa).

A bulk synchronous parallel workload, iterating in lock-step, moves at the speed of the slowest worker. If the slowest worker is determined by jitter effects in I/O latency, overall application progress becomes affected by the increased system noise of a virtualised environment.

There is considerable development activity in the area of virtualisation. New levels of performance and capability are continually being introduced at all levels: processor architecture, hypervisor, operating system and cloud orchestration.

The twice-yearly cadence of OpenStack software releases leads to rapid development of new capabilities, which improve its performance and flexibility.

Across the OpenStack operators community, there is a continual collaborative process of testing and improvement of hypervisor efficiency. Empirical studies of different configurations of tuning parameters are frequently published and reviewed. Clear improvements are collected into a curated guide on hypervisor performance tuning best practice.

By using optimisation techniques such as these, the overhead of virtualisation for CPU-bound and memory-bound workloads is reduced to typically one–two percent of bare metal performance. More information can be found in Further Reading for this section, below.

Hardware devices that support Single-Rooted I/O Virtualization (SR-IOV) enable the hardware resources of the physical function of a device to be presented as many virtual functions. Each of these can be individually configured and passed through into a different VM. In this way, the hardware resources of a network card can provide performance with close to no additional overhead, simultaneously serving the diverse needs of many VMs.

Through direct access to physical hardware, SR-IOV networking places some limitations on software-defined infrastructure. It is not typically possible to apply security group policies to a network interface mapped to an SR-IOV virtual function. This may raise security concerns for externally accessible networks, but should not prevent SR-IOV networking being used internally for high-performance communication between the processes of an OpenStack hosted parallel workload.

Recent empirical studies have found that using SR-IOV for high-performance networking can reduce the overhead of virtualisation typically to 1-9% of bare metal performance for network-bound HPC workloads. Links to some examples can be found in the Further Reading section below.

Some classes of HPC applications make intensive use of hardware acceleration in the form of GPUs, Xeon Phi, etc.

Specialised compute hardware in the form of PCI devices can be included in software-defined infrastructure by pass-through. The device is mapped directly into the device tree of a guest VM, providing that VM with exclusive access to the device.

A virtual machine that makes specific requirements for hardware accelerators can be scheduled to a hypervisor with the resources available, and the VM is ‘composed’ by passing through the hardware it needs from the environment of the host.

Device pass-through, however, can have a performance impact on virtualised memory management. The IOMMU configuration required for pass-through restricts the use of transparent huge pages. Memory must, therefore, be pinned in a guest VM using pass-through devices. This can limit the flexibility of software-defined infrastructure to over-commit virtualised resources (although over-committed resources are generally unlikely to be worthwhile in an HPC use case). Static huge pages can still be used to provide a boost to virtual memory performance.

The performance overhead of virtualised GPU-intensive scientific workloads has been found to be as little as 1% of bare metal performance. More information can be found in the Further Reading section below.

Different strategies for efficient handling of hardware devices. Here a network card is used as example. In paravirtualisation a virtual network device is created in software that is designed for the most efficient software interface. In PCI-passthrough a physical device is transferred exclusively from the hypervisor to a guest VM. In SR-IOV, a physical device creates a number of virtual functions, sharing the physical resources. Virtual functions can be passed-through to a guest VM leaving the physical device behind in the hypervisor.

The overheads of virtualisation are almost eliminated by moving to a different model of compute abstraction. Containers, popularised by Docker, package an application plus its dependencies as a lightweight self-contained execution environment instead of an entire virtual machine. The simplified execution model brings benefits in memory usage and I/O overhead.

Currently, HPC networking using RDMA can be performed within containers, but with limitations. The OFED software stack lacks awareness of network namespaces and cgroups, which prevents per-container control and isolation of RDMA resources. However, containers configured with host networking can use RDMA.

OpenStack’s software-defined infrastructure does not need to be virtual.

Ironic is a virtualisation driver. Through some artful abstraction it presents bare metal compute nodes as though they were virtualised compute resources. Ironic’s design philosophy results in zero overhead to the performance of the compute node, whilst providing many of the benefits of software-defined infrastructure management.

Through Ironic, a user gains bare metal performance from their compute hardware, but retains the flexibility to run any software image they choose.

The Ironic project is developing rapidly, with new capabilities being introduced with every release. OpenStack’s latest release delivers some compelling new functionality:

Complex image deployments (over multiple disks for example) is an evolving capability.

Using Ironic has some limitations:

See the section OpenStack and HPC Infrastructure Management for further details about Ironic.

From its inception in 2012, Australian scientific research has benefited from the NeCTAR Research Cloud federation. Now comprising eight institutions from across the country, NeCTAR was an early adopter of OpenStack, and has been at the forefront of development of the project from that moment. 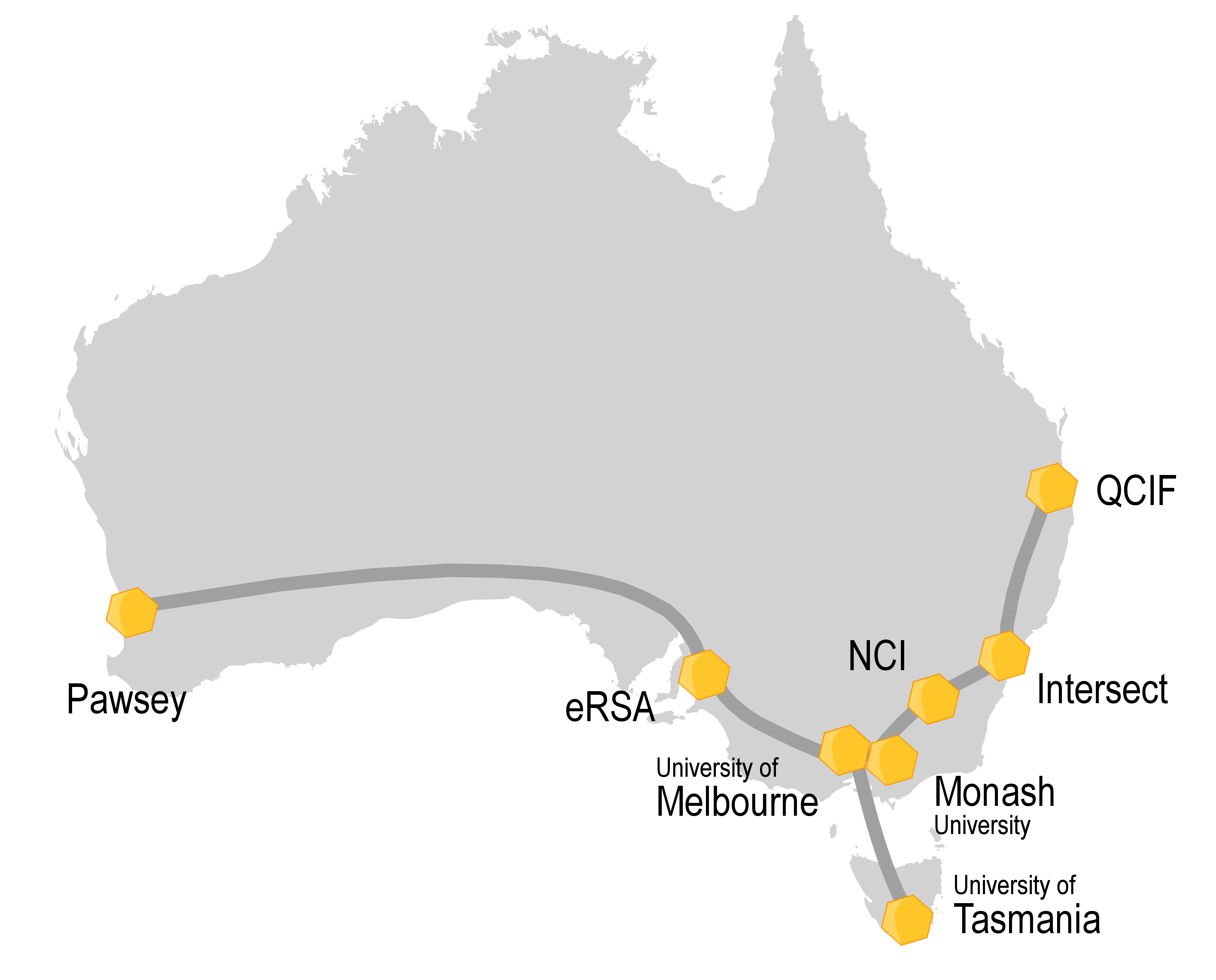 MonARCH has 35 dual-socket Haswell-based compute nodes and 820 CPU cores. MonARCH exploits cloud-bursting techniques to grow elastically by using resources from across the NeCTAR federation. The infrastructure uses a fabric of 56G Mellanox Ethernet for a converged, high-speed network. The cloud control plane is running Ubuntu Trusty and the KVM hypervisor. OpenStack Liberty (as of Q3’2016) was deployed using Ubuntu distribution packages (including selected patches as maintained by NeCTAR Core Services), orchestrated and configured using Puppet.

MonARCH makes extensive use of SR-IOV for accessing its HPC network fabric. The high-speed network is configured to use VLANs for virtual tenant networking, enabling layer-2 RoCEv1 (RDMA over Converged Ethernet). RDMA is used in guest instances in support of tightly coupled parallel MPI workloads, and for high-speed access to 300TB of Lustre storage. 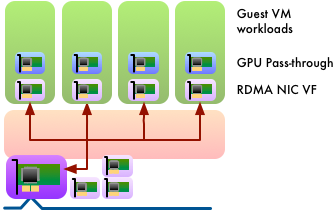 Specific high-performance OpenStack flavors are defined to require pass-through of one or more dedicated GPUs. This enables one to four GPU instances to run concurrently on a dual-K80 compute node, e.g., to support CUDA accelerated HPC workloads and/or multiple interactive visualisation virtual-workstations.

“Using OpenStack brings us a high degree of flexibility in the HPC environment. Applying cloud provisioning and management techniques also helps to make the HPC-stack more generic, manageable and quick to deploy. Plus, we benefit from the constant innovation from the OpenStack community, with the ability to pick and choose new services and projects from the ecosystem. OpenStack’s flexibility in the SDN space also offers compelling new avenues to integrate researchers’ personal or lab servers with the HPC service.

“However, before racing out to procure your next HPC platform driven by OpenStack, I’d recommend evaluating your potential workloads and carefully planning and testing the appropriate mix of hardware capabilities, particularly acceleration features. KVM, OpenStack’s most popular hypervisor, can certainly perform adequately for HPC—in recent testing we are getting 98 percent on average and up to 99.9 percent of bare metal in Linpack tests—but a modern HPC system is likely to require some subset of bare metal infrastructure. If I was planning a new deployment today I’d seriously consider including Ironic so that a mix of bare metal and virtual cloud nodes can be provisioned and managed consistently. As Ironic is maturing and becoming more feature-complete, I expect to see many more highly integrated deployments and reference architectures emerging in the years to come.”

Optimising for “Time to Paper” using HPC on OpenStack

When evaluating OpenStack as a candidate for HPC infrastructure for research computing, the “time to paper” metric of the scientists using the resource should be included in consideration.

Skeptics of using cloud compute for HPC infrastructure inevitably cite the various overheads of virtualisation in the case against OpenStack. With a rapidly-developing technology, these arguments can often be outdated. Furthermore, cloud infrastructure presents a diminishing number of trade-offs in return for an increasing number of compelling new capabilities.

Through careful consideration, an HPC-aware configuration of OpenStack is capable of realising all the benefits of software-defined infrastructure whilst incurring minimal overhead. In its various forms, virtualisation strikes a balance between new capabilities and consequential overhead.

This document was written by Stig Telfer of StackHPC Ltd with the support of Cambridge University, with contributions, guidance and feedback from subject matter experts: